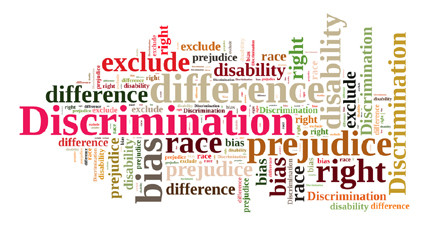 My American friends doing business in China all have told me that if any subjective experience from their life in China would deserve the name of “culture shock,” it would be the realization that Americans and Chinese have extremely different attitudes toward discrimination. Perhaps Americans are overly sensitive to discrimination, but perhaps Chinese have a long way to go in terms of being sensitive enough to it.

The comments of returning Americans reminded me of one conversation that I had in the US. The topic was about whether we should use big data information to do consumer profiling. For example, based on the consumer’s IP address and website visiting history, manufacturers can draw inferences about her/his demographic information. My American friend, John, was very uncomfortable about the implications of the process. He said the behavior was discriminatory, because we would use stereotypes and generalizations to profile a specific consumer. If John made similar comments in a Chinese business context, I believe people would think he was crazy.

An old news story reported that two American companies were accused of discrimination in hiring because they had used criminal background checks to screen out workers. When I read that story, my first response was: “Isn’t it the employers’ basic right to check on the criminal history of potential employees?” Since even the American government requests criminal/arrest records on their enlistment contracts, it seemed fair and appropriate for the private sector to hold factory workers to the same standard. But, as I dug more into those cases, I started to understand the rationale for objection. Specifically, the concern would be that employers shouldn’t reject potential employees based only on criminal records that are unrelated to the qualifications required for the job. Maybe a minor crime committed 20 years ago indeed shouldn’t doom someone to a lifetime of unemployment.

In China, it is assumed that companies will reject anyone with a criminal background, and there is no likelihood of interpreting the rejection to be discrimination. Most Chinese companies are still using even gender and age to screen their employees, so it would be unimaginable for Chinese bosses not to check for criminal backgrounds. In Chinese job advertising, it’s not rare to see specific requirements for the candidates’ heights, or even appearance. Days ago, a headhunter friend was recruiting a PR manager for a prestigious Chinese company. The advertising stated: “ Female, age under 35, height above 165 cm, married with kids.” I asked her how on the earth professional performance would depend upon whether the candidate had children or not, or what her height was. The headhunter replied, “I am just being honest with both parties. I know the employer holds this standard. The employer needs the PR manager to be presentable, and requires a profile that will reduce risk that she will take future maternity leaves. If I want to be politically correct and therefore avoid informing the candidates of the actual requirements, I will just waste their time and my effort on preparing interviews.”

It’s difficult to discuss discrimination with Chinese because there is no legal protection against discrimination of the common types, and most ordinary Chinese do not even have a basic understanding of what discrimination is. Most Chinese still hold historical culture values, such as preference for fair skin over dark skin. My friend Mike, an African-American based in Shanghai, had some terrible job interview experiences. When he applied for an English teaching job, he lost the competition to an attractive-looking Russian, who speaks spoken English but has blond hair and blue eyes. However, most of my Chinese acquaintances don’t think that Mike was a victim of discrimination. They empathized with the schoolmaster, who had to hire a typical Caucasian-looking guy on the supposition that parents wouldn’t believe that non-white people could teach authentic English.

I think it would be the best for people not to have prejudice. However, if people are going to be prejudiced, at least they should not treat people differently based on their prejudices. “Prejudice” may be understood to mean that an assumption is made about characteristics of an individual, based upon assignment of that individual to a category that is identified by the evaluator, without examination of whether or not the individual fits the supposed profile that is associated with the category of persons to which he or she is assumed to belong. “Discrimination” may be understood to mean that an evaluator, who is in a position to take action, goes forward to use assumptions about group characteristics to the advantage or disadvantage of an individual member of a group.

Yet prejudice always naturally leads to discrimination especially in country like China, where there are few laws prohibiting discrimination. My friend, an owner of a medium size company, proudly posted her hiring criterion on line: urban male, from middle-income family. I asked her how “urban,” “male,” and “middle-income family” were related to the job opening. She said that based on her past recruiting experience, women are too emotional in the workplace, rural people lack social skills, and people from extremely rich or poor families lack a good work ethic. Since no law regulates her recruitment criteria, she has no reason not to discriminate based on her prejudices, which she blindly believes are derived from precious experience.
In the USA a heightened sensitivity to discrimination may lead to an unwillingness by organizations and by some individuals to exhibit discriminatory behavior. China might need to do the same. Far from the harmonious society claimed to exist by the government, the actual society of China today is characterized by discrimination everywhere – gender discrimination, employment discrimination, regional discrimination, and disabilities discrimination. American over-sensitivity to discrimination might be the best way to correct centuries-old behaviors. If a piece of wood bends to the right, you have to bend it to the left, not to the middle, to fix it. It will not be easy and quick to bend from left to right. It took 30 years for American airlines to stop firing female employees for marriage. It might take even longer time for China to correct its discriminatory behaviors.